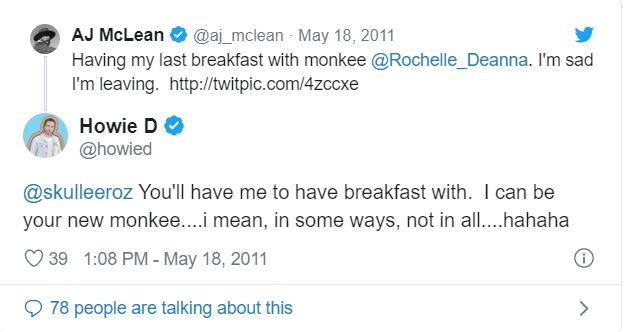 Right now, Twitter can be an anxiety-inducing place to be… but it isn’t always!

One of the reasons that many of us even joined Twitter in the first place was so we could keep up and communicate (!!! how wild is that, still?) with the Backstreet Boys themselves. One of the gems that we weren’t necessarily expecting was seeing Kevin, Howie, AJ, Brian and Nick interact with each other. Since 2011ish, their timelines have been chock full of different peeks into the minds of our fave five.

While we’ve written other posts about their tweeting habits, including Nick’s excited tweets, Brian’s first year of tweets, Kevin’s tweets in general, and the blossoming bromantic tweets between Nick and Howie, we’ve not actually delved into the tweets that they’ve sent to each other. We really love bringing up the old stuff and we hope that you enjoy taking a look back with us!

Of all the Backstreet Boys, Nick Carter has had the most Twitter presence and therefore, has had a lot of opportunity to expose his bandmates’ fears, thoughts, and who might be responsible for those outdoor music video settings.

@aj_mclean is scared of clowns. I don’t get it lol. I love em haha. https://t.co/ASf0WLu5kI

@howied is thinking of 100 kisses. I can see him thinking about it as we speak.

@JSo oh don’t be so sensitive @howied they know. Do you?

@skulleeroz AJ dont bomb when your in an airport,, They will arrest you for sure.

@howied is the coolest @backstreetboys
Trust me on this!

@howie_d thanks sweet d-licious. your just like a lovely box of chocolates buddy. Soooooooo sweet. :p

I’m trying to get @backstreetboys to do a BSB Harlem shake video but Kevin Thinks its out dated and whack.I tried guys. 😦 @kevinrichardson

Kevin Richardson is everything on Twitter that he is in person – a big brother and quietly humorous. Our favorite tweets are definitely when he tweeted all of the other BSB individually, calling them ‘biatch’… except for Brian, who got a special ‘briatch’.

@howied Aaah haa haa. That is some good shhhhhh

UPDATE: The day after this post was written, Kevin gave us another gift of sass that he does so well.

All good. Y’all can tour those albums when I take my next hiatus…

Howie D. might not tweet too much, but when he does, it’s probably some of the best. Much like Howie in person, he doesn’t say much to say, but what he does say lands some real zings. Also, can we talk about how he was the only Backstreet Boy to tweet about Nick every week on Dancing With The Stars? Aw!

@skulleeroz You’ll have me to have breakfast with. I can be your new monkee….i mean, in some ways, not in all….hahaha

@skulleeroz Ohhh another sexy AJ picture. I missed these. Bring it on!

@skulleeroz Come in here and i’ll get you a big ol wet kiss…that will make u feel better!

@nickcarter What is going on with you and this monkey obsession?

You are more then invited @brian_littrell!

@nickcarter @JSo LOL. Jenn you know where that came from. We both know I am your favorite and little Nicholas is butt sore. Too funny!!! 😉

@nickcarter Dude, I’m starting to sleep now cause I plan on getting buck wild!! I might even have a shot with my party bro! How about you?

@howied Happy Valentine’s Day to all the lovers out there. May this day fill your hearts with love all year long. 100 kisses to all of you!

So proud of my bro @nickcarter for all he accomplished on @DancingABC. You represented your @backstreetboys well. Thanks @SharnaBurgess!!!

Glad I was able to go
and support my bro @nickcarter at the Nick and Knight show tonight in Orlando.… http://t.co/JmehwJghRF

Went go kart racing with Brian @brian_littrell. Of course I had to let him win….;) jk. Fun times!!! http://t.co/4rmpjjRZIN

This is what @nickcarter and I caught yesterday. Fun times!!!!!! http://t.co/v72FbhnMt2

Hanging with my bro @nickcarter and friends in the Keys going fishing. Good times!!!!! http://t.co/HNl8h6HA4H

@itstatiDUH Aint that for sure…@nickcarter and @brian_littrell can talk a lot of smack, but team PEE PEE is the winner!

Yo @nickcarter…you looking sexy today at your video shoot? #bluesteelpose

Also, much like in real life, AJ McLean has always used every last character available in a tweet to talk to his Backstreet brothers about anything and everything. The man always says what’s on his mind and doesn’t care who reads / knows it!

@nickcarter thanks buddy. I may of seen some footage and the awesome trailer today to. Man this movie is gonna kick ass! Fly safe bro.

@howied dude that hilarious I’ve been there before so I feel your pain only difference with my wet moment was I was in jeans an a t shirt!!

@brian_littrell hey bro I hope you know who brought you know what cause I’m craving me some chicken salad!!!!

@kevinrichardson yo follow me so I can send a direct message to u with all my info. Tell kristin what up and lil mason to as well as the fam

@kevinrichardson. Hey fucktard its aj call me bro. Been trying to get together with you so u can meet the wifey and see me of course:)

Amazing day yesterday at Disney with my boy @nickcarter and his fam! Who would of ever thought nick and I… https://t.co/EorGWswGTP pic.twitter.com/wqpp4b1Wp7

Happy bday @kevinrichardson. Love ya bro. Oh if your wondering what that noise is in the background it’s my dog sniffing around for scraps and sniffing his butt. Ha. pic.twitter.com/2xU7qvdX9E

What a wonderful day to be with family and friends. Thanks @kevinrichardson as always for the hospitality and for calling your friend the Easter bunny to stop by and say hey to the kids. Happy Easter everyone. pic.twitter.com/lNkyOnpXf1

Congrats again to my big bro @kevinrichardson for his new bundle of joy! Ava’s future husband???? Hmm? Love ya bro!

Before Brian Littrell disappeared (for the most part) from Twitter, he had some really golden tweets…er, chirps. Sometimes he returns and boy, when he does…he drops tweets we talk about for a long time (i.e. Howie’s birthday 2019).

@skulleeroz hey do you want me to bring you some shorts???? Hahaha chirp

@nickcarter right! Can someone explain to me why the Backstreet Boys didn’t get a Grammy for I Want It That Way! Hehehehe chirp 😉

@howie_d OMGOMGOMG Howie D chirped back to me!!!!!! Chirp 😉 what up Hommie. 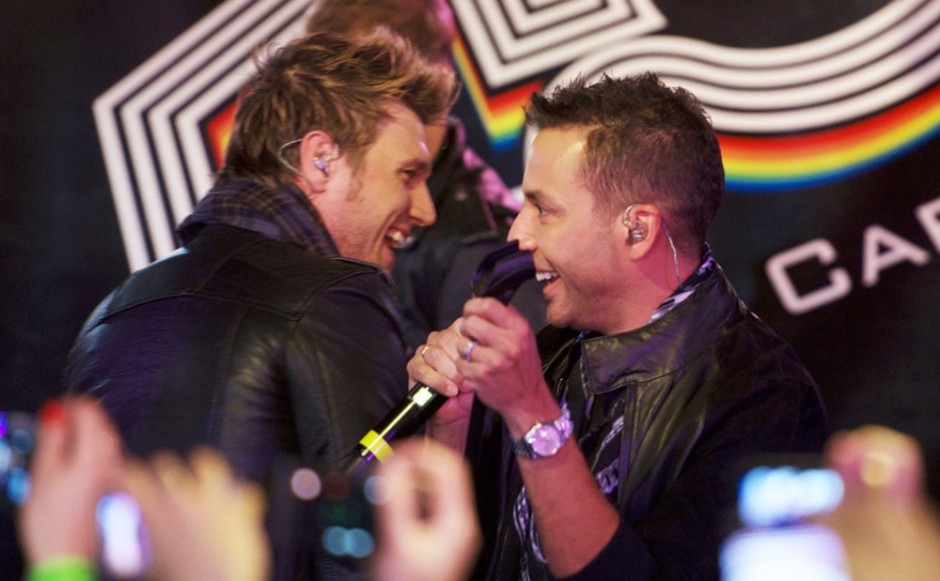 We’ve written about Kevin and Nick, Nick and Brian, but since the invention of Twitter, we’ve realized the gem that is Howie D. and Nick Carter.

From bringing the party to the first Backstreet Boys cruises (and even now) to Howie’s MASSIVE support for Nick on DWTS and I Heart Nick Carter to Nick’s obsession with Howie’s “100 Kisses” and ALL of the (playful) shade throwing, these two are endless entertainment!

END_OF_DOCUMENT_TOKEN_TO_BE_REPLACED 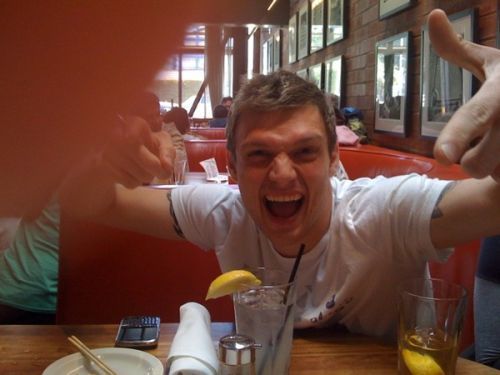 It could be argued that Nick Carter is the most excitable Backstreet Boy… and we have the tweets to prove it. There’s even different kinds and levels. Continue reading for details…

Are you as excited as me? If so.Tell me how excited you are. : Im so excited my eyeball popped out and my cat ate it.

I am itching with electricity. So damn excited about the future. So much to tell you.

Are you guys excited or what? @nickandknight @jordanknight we are gonna make you melt like hot chocolate on a strawberry. Get yo tickets.

2. Those Times Where His Excitement Was OFFICIAL.

I’m officially excited for the movie the hobbit. And in the trailer they sang the song misty mountain, how freaking cool!!

@backstreetboys alright I’m officially excited about this years official backstreet cruise. Are you coming?? Don’t leave me at sea all alone

3. Sometimes, He Just Wants YOU To Be Excited!

Are you excited about the new @backstreetboys album?

Put the word out. April 22nd unreleased solo song only at http://t.co/oFIZGblFU2 You excited? I can stop the process if you want. lol

Hope you are as excited as me. Thank you @shainalagliva18

@Andrea_Pas89 I hope your as excited as I am. Love ya!

We want to see you on tour! Here is a little something extra to get you excited! #NickandKnight http://t.co/LXbK4NvGOQ

….And that time he wanted us to be excited about Nick & Knight “coking” out. Uhhh, yeah, about that…

I hope you guys are as excited as I am about the @nickandknight album coking out. Thank you for all the support. We PROMISE you’ll love it!!

Hey everyone!! Lets all thank perez for putting up our song. Go and listen . I’m sooooo excited.:):):) Oh! And perez? We love GAGA too! :p

I am so excited.”I’m taking off is releasing in Canada with an entirely new single. The single is out today on iTunes. “Love can’t wait”

I’m freaking so excited about this!! http://t.co/cPoGx0Oe

So excited for you to hear ” I gotta get with you” on april 22nd only at http://t.co/oFIZGblFU2

OMG!! SO EXCITED!.@z100Newyork is going to play our new single tomorrow @ 7pm ET. @RadioMoBounce WE LOVE YOU Z!! Thank you.

So excited to announce my new project http://t.co/d8lsLuhNrt Spread the word!

@backstreetboys is about to kick off the tour in 4 hours. I’m so excited to have fun with you guys!

About ass and aliens…

About everyone staring at his butt, er, the BSB cruise…

Do me a favor and try not to stare at my butt on the cruise this December… It gets hot!! Seriously though I’m soooooooo excited!!

Ok @Lauren_Kitt just found out she MAY be a @WWE DIVA. Imagine YOUR GIRL putting the smack down in the ring! OMG i’m so excited! MAKE NOISE

I will have to be at every @WWE show! So excited!!

@wbff so excited to see @Lauren_Kitt compete. She worked so hard! Maybe you can come to Vegas?

Speaking of that. I freaking LOVE Star Trek. There’s a new one coming soon! Soooo excited.

Getting ready to play club G.A.Y. In London. We are so excited to party with our gays. #gaypride

Getting ready to perform on @jayleno tonight. So excited!

I’m really missing @Warcraft Its a great escape. About to go on stage in Birmingham. @AllSaints_ is on stage right now. So excited.

So excited. I’m going to a @TBBuccaneers game on the 30th against the bengals. Gonna be sitting in the stands like the fanatic I am lol.

We’re going to eat at Nobu sushi in London. So excited.

GREAT NEWS! Schedule has opened up and were now doing @Comic_Con again. SO EXCITED!! @skulleeroz will be attending.#DeadWest @theasylumcc

Oh Nick Carter – As excited as you are for everything, we will always be more than excited to see your tweets and your face, to be honest. Follow Mr. Carter on Twitter because you NEVER know what he’s going to be excited about next!