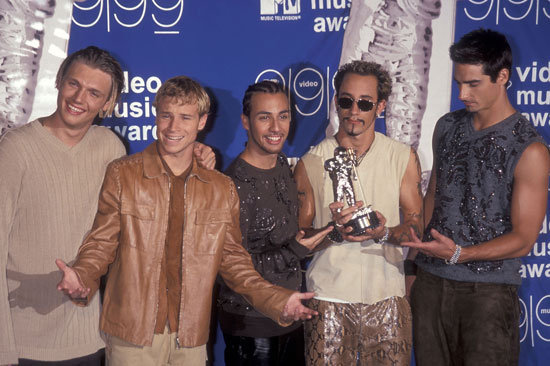 The Michael Jackson Video Vanguard Award, formerly known as simply the Video Vanguard Award and Lifetime Achievement Award, was introduced in 1984 during the MTV Video Music Awards. The honor is given to artists that have contributed to the impact MTV has had on pop culture, acknowledging their body of work.

Somehow, the Backstreet Boys have been skipped over. From a fan perspective, we didn’t vote for them to be #1 on TRL everyday from for them to be looked over now.

Dear MTV, the Backstreet Boys deserve this honor. Hear us out.

They’ve had court battles, life threatening surgeries, and personal battles all in the public eye.

They’ve grown up, gotten married, and had babies.

They’ve continued to work hard, to tour the world, to make music, to produce music videos long past the times of TRL and regular on-air video play, and connect with fans long past the time that the general public supported them the most.

They have each other’s backs and they have ours. They’ve never been bitter that they don’t get the fair amount of attention that their individual and collective talents deserve. They carry on because this is in their blood, because they love what they do, because they are a family.They remain five of the most humble guys that are still making music.

They are, and continue to be, the best selling boyband of all time.

Any appearance by the Backstreet Boys as recently as 2016 have garnered major attention from those who seem to have “forgotten” why they loved these Boys. Even those who aren’t fans can’t seem to deny the talent put before them.

If it comes down to music videos, please note that videos like “I Want It That Way” and “As Long As You Love Me” have 270+ million and 100+ million views on VEVO. That’s only in the past 7 years. Oh, and the “Everybody” video, directed by Joseph Kahn, who is now one of the biggest directors in the industry.

With the Backstreet Boys Las Vegas residency coming up, we feel like it’s the perfect time to bring them back to the forefront and give them the recognition that their 24 years of hard work deserves.

Don’t let us down, MTV. Don’t let the Backstreet Boys down.

Fans: In case this post is not enough, please sign this petition to let MTV know how many people think the Boys deserve this honor. Let’s get this!

3 thoughts on “Dear MTV, Tell Me Why… The Backstreet Boys Don’t Have A Michael Jackson Vanguard Award”