In 1999, there was us. Most of us were kids, most of us did not have kids, and all of us shared the same love we do today.

In 1999, there were the Backstreet Boys. Before wives and children of their own, they were coming into their own as adults and selling out arenas worldwide. They were creating a hysteria within us by simply showing up and singing their music.

The Into The Millennium tour would prove to be the point where many fans became hardcore fans, dedicated for life. It was the beginning of an era; not just for the Boys, but for pop culture. Allow us to remind you how awesome it really was:

1. Getting Tickets To The “Into The Millennium” Tour Was CUTTHROAT.

The tour was the hottest ticket around and God bless our parents for indulging us on this one. Now that we are old enough to buy our own tickets, we know what our parents went through and it was even harder back then. Most arenas sold out in minutes and, please note, online ticket purchasing was not a huge thing in 1999. You had to actually line up at box offices and Ticketmaster vendors to get your tickets or go by phone (while you looked at the seating chart in the phonebook). The fact that the tour was selling so quickly with only these options is insane!

2. That Was Really The First Time Most Of Us Knew What It Felt Like To Feel Our Hearts Exploding.

That feeling we get now when the lights go down just before a BSB concert, all started with Millennium. As soon as Kevin raised his eyebrow and opened his mouth with the “Are you ready to paaarrrrr-taaayyy?!” – We. Were. Done. Our hearts were never the same and from that point on, we were addicted to the Backstreet high. 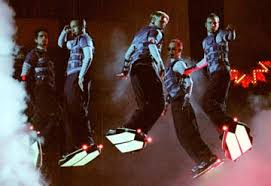 For the first and last time, the Backstreet Boys FLEW OVER OUR HEADS. We don’t know how they were talked into it (especially height-fearing Brian), but we were definitely aware that no other boyband was that awesome. We also couldn’t help but wish that one of them might fall on top of us (Look, we had no concept of pain then). Also, we obsessed over the story about Kevin’s pants falling while he was in the air and every girl wished she was there. Simple times, folks. 16 years later, Kevin rips his pants onstage and walks around like it’s no big deal.

4. Kevin Rising Up And Playing The Piano Along With Nick On Drums. While they played a few of their own instruments during the first Backstreet U.S. tour, there is not one of us who didn’t swoon when Kevin’s piano rose from the middle of the stage, playing an instrumental and then going into “Back To Your Heart”. Tie in Nick on the drums and the smooth vocals of Brian, AJ and Howie and we were puddles on the ground.

5. “The Perfect Fan” Got Our Moms Involved.

Brian wrote “The Perfect Fan” (scoring points with our moms) then invite moms onstage while they sang it (pretty sure that made him the top mom-approved BSB). Most of our moms were already fans of our wholesome Backstreet Boys, but this just allowed them to be out about it. Of course, we thought it was cool that our mom loved them too – that meant we could rewind the cassette tape in the car and play it over and over. It also meant we had someone going with us to the concert that had a credit card for the merch.

6. The Boys Were Untouchable.

At the time of the “Into The Millennium” tour, there was no such thing as VIP. You couldn’t just buy your way in to meet the Backstreet Boys and, really, with good reason. We were CRAZY. The majority of us were going through puberty and didn’t understand our feelings, we just knew that if we got within reaching distance of Nick, Brian, Howie, AJ, or Kevin – we were going to take one home. Mom would approve! There were very few lucky fans who received the chance to do meet and greets back then. My, my, how far we have come! While Millennium was really the height of everything career wise, the Backstreet Boys only used it as the first step to show us what they were capable of. Since then, they’ve continually impressed us with tour after tour, album after album, success after success. We have grown, the Boys have grown, and times have changed but the “Into The Millennium” tour was absolutely a game changer for all of us. 16 years later, we still have those 1999 feelings and we wouldn’t have it any other way (‘Cause we want it that way).