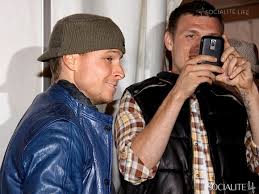 It happens when you least expect it. You could be sitting at work, going to sleep, in the middle of eating your oats, or choosing which VIP photos to put into your new collage when IT happens. It’s one tweet.

Could it be? Is a Backstreet Boy tweeting? Or was it a drive by tweet? One and done? You send a response, just in case.

Of course you’re happy for your friends – they’ve been begging for a tweet/follow/acknowledgement as long as you have. Suddenly, you’re wishing it was your birthday. At one point, you’re actually looking for friends that have birthdays to tweet the Boy about.

After seeing fan after fan ask the same question you had prepared and watching the Boy answer, you go a little crazy. What to tweet, what to tweet. OF COURSE! Nick will LOVE seeing your bowl of healthy cereal, Brian will adore your Christmas tree, Kevin NEEDS to see this sunset…

4. You have a small meltdown / sigh of relief when he stops tweeting.

Phew, you can stop tweeting incessantly and going back to being rational.

But what if he’s still there?

WHAT IF YOU’RE MISSING YOUR CHANCE RIGHT NOW TO GET A TWEET?!

Your notifications go off and you blow it off as your friend trying to help you get a tweet from Boy when you notice it’s not from your friend – It’s from HIM. You’ve been tweeting random things for hours, you’ve forgotten to eat, you’ve actually ignored phone calls from the CEO of the company for THIS MOMENT.

The high doesn’t end with just the tweet. You have to screenshot it, favorite it, retweet it – JUST to make sure this is real life. You better hurry and post that tweet on Instagram so you can have it forever! Suddenly, your friends are tweeting you freaking out, you’re still freaking out, and the world has stopped. Don’t even try talking to you if you’re not talking about what just happened!

Those left without a tweet are going about 10 kinds of crazy. These are people that you are friends with on a daily basis that are you suddenly don’t even recognize. They are shooting off tweets faster than you can read, going from friendly and helpful to literally insane. The girl that was retweeting you last week is not going to jump off a bridge because Nick didn’t tweet her back. Then there are others who DID get a tweet, but one tweet was not enough! “WHYYYYY?! WHY DOES HE HATE MEEEEEE?!” begins to fill your timeline, and suddenly, you don’t know who these people are.

People who were actually doing work while the tweet-fest was happening are coming in on the tail end of this shindig. You try to feel bad for them, you even work in a few tweets to the Boy to help them out in maybe getting one, but then you realize, this is the perfect opportunity to retell your story of great triumph. The battles you fought to stand out in the great sea of mad tweets and the successful ending will have to be relived for as long as you are alive to tell it.

Events for this year?!  Solo Albums?!  Must get more details on the next tweet fest! YES! You will be the one that gets answered next time!

How is it suddenly 2PM and you have not even eaten breakfast? Or gotten showered? Or put clothes on? Suddenly, reality slaps you in the face and you get your act together, reveling occasionally in the delight of anyone that favorites YOUR tweet for the rest of the day.